Staff from the Authority have put up fire risk warning signs up on moorland sites, advising people how they can help to reduce the risk. The signs will remain in place until the fire risk has passed.

The key message from the Park’s Rangers is to enjoy the Park this Easter, but please be extra careful.

“It may not feel as though we’ve been basking in hot sunshine in recent weeks, but a lack of rain has led to very dry ground vegetation that could easily be ignited. If anything, the situation is more dangerous, as people might not be aware just how great the threat is, even in April.

“Fire can spread extremely quickly, as was seen in Guisborough Forest just last week, and this can cause significant damage to the landscape and its wildlife.

“People are asked to avoid lighting fires and BBQs and not to discard cigarettes, matches or glass bottles, including throwing cigarette ends out of car windows.

“The majority of moorland fires can be prevented so we would urge people to take extra care when visiting the National Park while the fire risk signs are in place.”

The period for controlled heather burning on the North York Moors ended on 15 April, which means any sighted fires will be wildfire and should be reported quickly to the fire service by dialling 999. 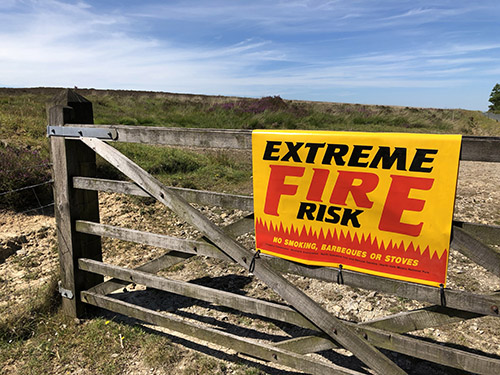