Dog owners are among the many millions of visitors who flock to the North York Moors National Park every year, but as the lambing season reaches its peak, the National Park Authority is reminding dog owners of their responsibilities.

Livestock worrying can have devastating consequences for farm animals and their owners, as well as other wildlife. Dog attacks on animals, especially sheep, can result in the loss of unborn lambs, serious injury and death. Often, the stress of being chased by a dog is enough to kill a sheep and flocks have been known to severely injure themselves while trying to escape an attack.

There are also serious consequences for owners of dogs who have been found worrying livestock. You may end up being sued for compensation and, in some circumstances; farmers are legally entitled to shoot dogs that are endangering their sheep.

The North York Moors National Park Authority wants dogs and their owners to be safe and happy while out and about, and so is urging all dog owners to be mindful of their actions. 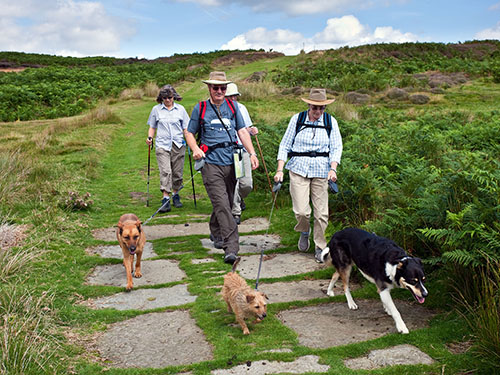 Debbie Trafford, Head of Recreation and Ranger Services at the North York Moors National Park Authority, said: “The North York Moors is a beautiful landscape with 26 miles of incredible coastline, two national nature reserves, 840 Scheduled Monuments and over 3,000 listed buildings, but it is also a working landscape that supports over 1,000 farmers. It is therefore vital that dog owners are careful and protect both their pets and the livestock who live here.

“Look out for sheep when walking your dog, and always put your dog on a lead when there may be sheep nearby. Responsible dog owners are always welcome in the National Park, but even the gentlest family dog can harm sheep if running loose.”

Debbie is also encouraging farmers to check that gates and fencing are secure and to consider using signs to let dog owners know when there are sheep in a field.

She then added: “Dogs can chase and distress other livestock, including cattle. Keep your dog on a lead, but if you feel threatened by cattle then let go of your dog’s lead and let it run free rather than trying to protect it and endanger yourself. The dog will outrun cows and it will also outrun you. It is also really important that if anyone sees a dog worrying sheep or other livestock that they report it to the police on 101.”

Inspector Matthew Hagen, of North Yorkshire Police’s Rural Taskforce, said: “All too often, livestock worrying has terrible consequences, particularly at this time of year. It impacts farmers’ livelihoods, and can result in animals suffering a slow and painful death.

“We want people to enjoy the North York Moors National Park, while taking responsibility for their dogs – it’s particularly important that dogs are kept secure when at home, and on leads and under control when they make their way through sheep fields.”

Other considerations dog owners should take include:

The North York Moors National Park Authority also offers lots of advice of the best locations to walk dogs safely, including forest and coastal walks. For more information on walks and for further advice please go to the Walking with Dogs homepage.

Further information about the North York Moors National Park and other press releases are available on this website.