Low Farm, Sneaton has been selected as part of the new Local Plan as an ‘Environmental Enhancement Site’ under Policy ENV13. There have been long standing issues on the site which has meant that development has not taken place. These issues, along with recent planning policies have prevented successful and acceptable proposals coming forward and the site has, over the course of 30 to 40 years, become increasingly unsightly. This has resulted in the vernacular stone farm buildings on the site which are significantly important to the character of the village becoming derelict. This taken together with the untidy nature of the adjoining land, which also forms part of the whole site, is having a significant adverse impact on the appearance of the village.

As part of the preparation of this Planning Brief, officers have met with representatives from Sneaton Parish Council and their desire is to see housing on the site in order to support the local facilities and services in the village.

2. Purpose of the Brief

Low Farm has been recognised as having redevelopment potential in order to achieve an environmental enhancement to the immediate area and streetscene. This Planning Brief has been prepared to assist and shape the redevelopment process as part of Policy ENV13 of the Local Plan and aims to;

The historic core of the village is predominantly of linear development, often set-back from the highway with small garden areas to the front. There has been some back land development (mainly to the north side of the village) as well as some modern in-fill. What remains clear however are the several historic farmsteads (Low Farm being one of them) which would have formed the core of the village (see map below) and the site at Low Farm is important in illustrating this history and evolution of the village. 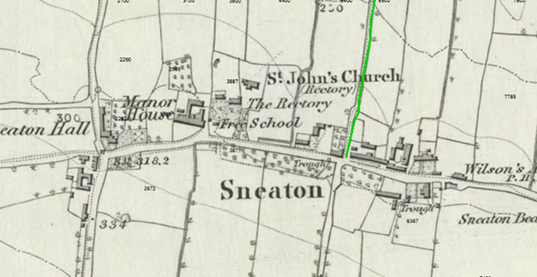 The site has been used in the past for agriculture, storage for a local scaffolding business, general agricultural purposes and also parking for the farm house and for farm workers.  The former farm buildings are now derelict and not in use as the roofs are no longer in place. The remainder of the site is used for wood storage and other agricultural uses and is generally untidy with no economic uses taking place. Outline planning permission for residential development and the demolition of farm buildings was granted in 1987. A further outline application for the residential development of the site was refused consent in 1992 and a subsequent appeal was dismissed.

The site measures 0.47 hectares in total and has a frontage of approximately 90 metres. The village of Sneaton has a simple linear form with dwellings on either side of the main street. There is no particular cohesion to the character of the village as there is a range of house styles and sizes. The site forms a large open site in the centre of the village and this is enhanced by the position of the buildings which are elevated from the main village road. On the front boundary of the site there is a dry stone wall set back from a wide grassed highway verge. The barns are located to the eastern half of the site, one barn is one and half storeys the other is single storey with a modern addition to its western gable. The eastern half of the site is undeveloped with a container sited in a prominent position and a small range of corrugated tin sheeting buildings. The site and barns are slightly elevated from the highway and are located approximately16 metres from the front boundary wall leaving a large open space to the front of the building line which is open and gently rises from the highway.

There is an existing vehicle access to the east of the farm buildings which serves the adjacent Low Farmhouse but this is outside of the defined site having being sold with Low Farmhouse.  Low Farmhouse is a Grade II Listed 2 storey stone and pantile former farm house. To the west of the site is Stainton House, a modern large stone and pantile dwelling. On the boundary between Stainton House and the development site is a TPO (Horse Chestnut) which lies outside of the defined site. There is also an area of land from the highway to the field behind Stainton House which is also specifically excluded in order to allow access to the fields to the south and a wider area off the road to enable large vehicles to turn and access the farm yard opposite.

The status of the barns is not disputed following their de-listing and having being provided with evidence that there was no functional link between the adjacent Low Farmhouse when it was listed in 1988, the Authority is satisfied that the barns are not curtilage listed. Despite this, they are considered to contribute to the setting of Low Farmhouse and the wider character of the village and therefore because of this are still considered to form important buildings worthy of sympathetic repair and conversion.

It is however important, as non-designated heritage assets, that any development on the site preserves the architectural and historical legibility and significance of buildings by respecting the status of the Listed farmhouse in relation to its (former) historic farmstead. Conversions, new buildings, access arrangements and treatment of the landscape should be carefully considered to maintain a subservient relationship to the farmhouse. Any application for planning permission will be advertised as affecting the setting of a Listed Building.

Sneaton is defined as a ‘Smaller Village’ in the new Local Plan where normal planning policy would permit the conversion of the existing traditional farm buildings for local needs housing and permit the construction of new-build local needs dwellings where the site is located in the main built area of the village, comprising a ‘suitable small site’ (Policy CO8 - Housing in Smaller Villages). The conversion of the buildings to create local needs housing would comply with the Local Plan policy, subject to suitable design and other detailed criteria. The redevelopment of the remainder of the site would be unlikely to meet the requirements of a ‘small suitable site’, capable of accommodating no more than two local needs dwellings as it is too large. It is the currently dilapidated state of the existing farm buildings coupled together with the local connection restriction and the size of the adjoining remaining undeveloped site which has hindered development of this site, and this would not change under the current housing policies of the Local Plan.

In order to try and address the development issues of this site, the Local Plan contains the following policy;

In order to deliver significant environmental enhancement, proposals for the re-development of the following sites will only be permitted in accordance with a planning brief agreed by the Authority:

There have been longstanding issues preventing development of this site in the past and as such this Planning Brief has been prepared between the landowner and the Authority.

Having regard to the location of the site in Sneaton, which is defined as a Smaller Village in the Settlement Hierarchy, and bearing in mind the environmental enhancement opportunity that is offered by the conversion of the derelict barns, it is envisaged that the site could be developed for a sensitively designed scheme of principal residence housing and local needs housing in accordance with Section 7 below.

In terms of the conversion element, it is envisaged that the character of the barns and their setting will be best achieved by their conversion to 1 or 2 principal residence dwellings as this will have least pressure on what fabric remains. This will allow the design principles as set out in Section 7 to be adhered to and minimise the need for additional openings.

With regards to the remainder of the plot, it is envisaged that this part of the scheme should be design-led, creating a layout and form which is appropriate for the context which in turn should inform and guide the number of achievable new units. Further guidance on this is set out in Section 7. It is however envisaged that the occupancy on the new build units should be limited to local needs dwellings (the new local connection criteria is set out in Policy CO13) to enable the new housing to meet local need and demand.

In the event of it being demonstrated that the development of the dwellings would incur viability issues, consideration will be open to discussion on numbers and also imposing a less restrictive ‘principal residence ‘occupancy for this new build element, see accompanying text to Strategic Policy ‘M’ Housing.

The applicant’s agent has indicated that the intention is to sell the site in parts to allow individual opportunities for self-build plots. As such it is envisaged that a S106 agreement or a phasing planning condition will be required to ensure that whole site is developed and that the full environmental enhancement of this site is fully achieved, as required by Policy ENV13.

The site contains a number of ranges of historic agricultural buildings/barns/pig sties which are considered to be of historic and architectural significance, along with an attractive dry stone wall on the site frontage. These buildings and structures should be sympathetically restored and incorporated into a scheme in order to retain the rural character of the site and the setting of the adjacent listed Low Farmhouse. 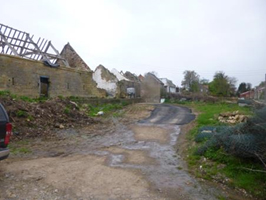 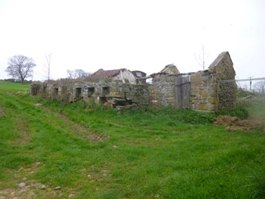 This is a prominent site within the centre of the village where the introduction of new dwellings to enable the conversion of the derelict farm buildings offers a significant opportunity to enhance the local environment of Sneaton. The development requires a non-standard, bespoke approach capable of providing sustainable and high quality design. The design should be in keeping with the character of the older part of the village and also respect and enhance the character of the site in relation to its historic and natural assets.

Conversion of existing stone barns and outbuildings: The development should meet the requirements of Policy ENV11 and Strategic Policy M and be in accordance with the following principles;

New Dwellings: The development of the new dwellings on the west of the site should be carried out in accordance with the following principles;

The highest standard of sustainable development principles will be expected across all stages of site planning, design and construction. The design and energy efficiency of buildings should be tested against appropriate standards and should maximise the potential for energy efficiency (see on-site renewable requirement above).

This site has the potential to create a high quality development which enhances the appearance of Sneaton village. The site has detracted from the appearance of the settlement for many years and this approach represents an opportunity to improve the environment of this area of the National Park and to provide additional dwellings to meet the aspirations of the village and the wider National Park communities.