Brown hares can be found on the moorland edge, in grassland and arable land, and woodland edge. They are widespread on low ground. In upland areas they are replaced by mountain hares. 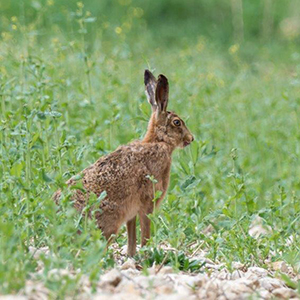 The brown hare has very long ears with black tips, and long limbs as well. They are larger than rabbits, with red-brown fur flecked with yellow. They might be nearly 2ft high. When they see humans they will run away, typically in a zig-zag, which is one of their tricks to help escape predators, such as foxes. Whereas rabbits will simply dart for safety! As hares live in very exposed habitats, they rely on their keen senses and fast speeds - up to 45 mph - to escape. You might sometimes find their footprints, the back foot print is about 15cm long and these will be parallel. The front paw prints are between them, about 4cm long.

Baby hares are called leverets. They are fully developed when they are born, with fur and open eyes. The nest is just made in the long grass in a small depression and is called a form. The young are left in the form or nest and are revisited by the female at sunset to be fed, but otherwise they don't receive much parental care. This is to avoid attracting predators to the next.

Hares can live to be over 12 years old, but typically they only live 2-3 years. They eat grass shoots, in winter they will eat shrubs when the snow hides their normal food.

Brown hares have no conservation status. In the past farmland was a mixed patchwork of smaller fields where there were often long grasses for hares to hide in. Today's farms are more specialised, either growing arable crops like wheat, or raising livestock. On these modern farms there is little food for hares in late summer and autumn, and livestock farms have few places to hide in.

Hares were introduced in or before Roman times, probably from the Netherlands.