Brown trout live across the UK from the chalk rivers of Hampshire to the acidic streams of the Highlands. They also live in saltwater habitats and although they are known there as sea trout, they are actually the same species. The fish you will see in the waterbodies of the Rye will be brown trout which spend their life in freshwater. If you’re lucky you might spot one jumping out of the water in search of insects.

They are a predatory fish, feeding mainly on flying insects, small fish and invertebrate larvae. It is important they have areas of tree cover above the river for several reasons. Firstly, the trees can provide shelter, but will also shade the water during the summer months. On a hot summer’s day when the water flow is low, rivers without shade can have temperature spikes and less dissolved oxygen in the water. The Rye can completely dry up during the summer, meaning the remaining pools can be especially susceptible to rising temperatures. Above 23 degrees can be fatal for trout. It needs coldwater habitats to survive.

Trout need both deep pools for adults and shallow, slow water for the young, meaning a complex river system, with riffles, pools and meanders is essential.

From grey to deep golden-brown, trout can display amazing variation in their appearance. They generally have a dark back and yellow underside, with reddish side spots with pale borders. Trout from the same stretch of river will have very similar spotting patterns. Unlike the rainbow trout, the tail is plain brown, and the side is lacking a pink stripe. Rainbow trout are native to the tributaries of the Pacific Ocean and North America. 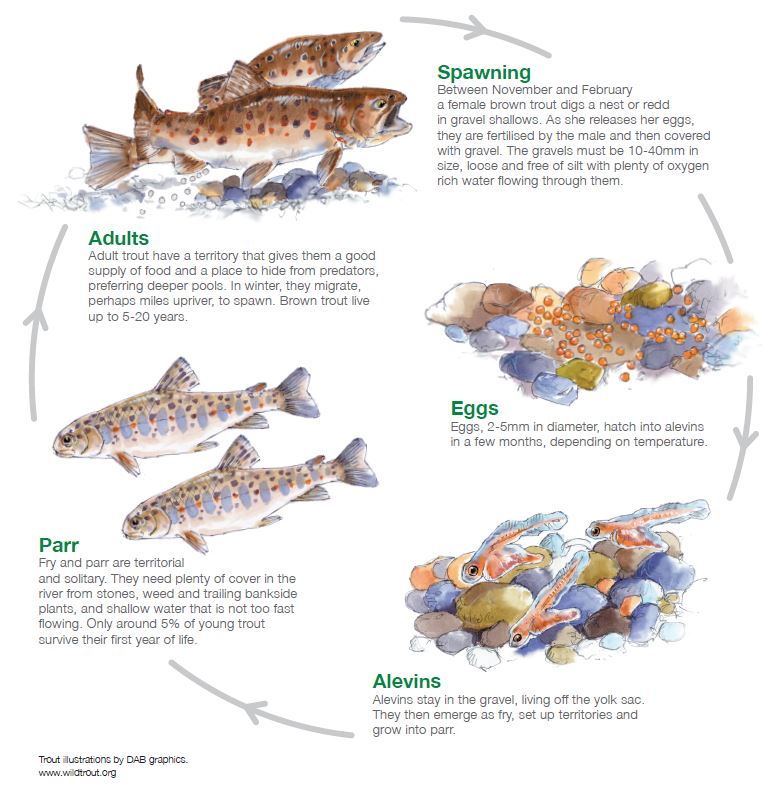 Spawning occurs between November and February, with the females laying eggs in a gravel nest, called a redd. The male releases sperm over the top then the fertilised eggs are covered with loose gravel 10-40mm in size. The eggs require small gaps within the gravel to keep up oxygen levels to development. If there is too much silt and sediment in the water, it can block up these gaps, effectively suffocating the eggs and reducing their chances of survival. In a healthy stream, the eggs will hatch into alevin then develop into small fish called fry. They require plenty of cover from stones, weeds and bankside vegetation. If they manage to survive their first year, very few do, they may go on to live up to 20 years.

Much of the conservation work being carried out by Ryevitalise is to benefit the river system as a whole, creating better habitat for brown trout through a landscape-based approach. One of the biggest threats to brown trout is smothering of spawning gravels with silt and sediment. This can be a result of overgrazing on banks causing excess erosion or soil runoff from arable fields. By creating buffer strips along riverbanks in arable and livestock fields, banks are both stabilised and soil is kept on the land.

Trout need to be able to move around the river system to get to spawning grounds, find shelter, and catch food. Unfortunately, man-made barriers like weirs and elevated pipes or culverts exist throughout the Rye catchment. These limit movement, isolating and generally decreasing the health of trout populations. Ryevitalise is working with land managers to find solutions to these problems. This can be anything from putting a pipe in at a more ‘trout-friendly’ level, or creating fish passes round weirs.