During the 18th century smuggling was rife in the UK. Due to the huge expansion in trade and wars with France, the Government introduced heavy import duties onto goods. Smuggling provided a cheap alternative to avoid paying the duty and items such as tea, silk and tobacco became popular on the black market.

You can experience a sense of smuggling in Robin Hood’s Bay. The village’s maze of narrow streets was ideal to slip through unnoticed and it soon became a major hub for smuggling on the Yorkshire coast. Smuggled goods were distributed via the local inns and passed up through the village along a network of secret subterranean passageways and tunnels. It was said that a bale of silk could travel to the top without leaving the houses.

Goods continued inland on pony trails running from Robin Hood's Bay to Fylingdales Moor, along a route known as the Fish Road or Salt Road. Many Robin Hood’s Bay wives walked these tracks carrying baskets of fish and smuggled silk around their waist. Legend says they carried pig bladders full of gin under their petticoats!

The Government became worried about the loss of money caused be smuggling and calculated that around £4 billion worth of revenue was lost to illegal imports of tobacco and alcohol every year. At one point 80% of all tea in the UK was drunk illegally and smugglers could earn up to a week’s wages from just one pound of tea.

After the battle of Waterloo, the navy was redeployed to deal with the smuggling crisis. From the 1830s faster steam vessels were introduced to be used instead of smugglers sailing ships. This, along with stronger law enforcement brought about the demise of smuggling.

Capture the ambience of this time with a visit to those places in Robin Hood's Bay linked with the history of smuggling. 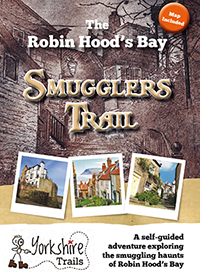 There's a mystery to solve in Robin Hood's Bay! Follow the route on this self-guided smuggling adventure and you'll explore, discover, learn and solve the hidden quirks and clues about why Bay was one of the busiest smuggling villages on the east coast during the 18th century.

Pick up The Robin Hood's Bay Smugglers Trail today to start your adventure.