Wildlife artist Andrew Hutchinson is best known for his highly detailed portrayals of the natural world.

After an early apprenticeship as a joiner, he later completed a diploma in Graphics and Illustration.

While working as an archaeological illustrator, Andrew met his wife and – following a decade in the Highlands of Scotland – they and their daughter returned home to his beloved Yorkshire.

Andrew now lives near Pickering and takes his inspiration from the unspoiled beauty of the North York Moors.

He has exhibited with many of the world’s top wildlife artists and stages a one-man show every year in his hometown, Guisborough.

He has completed many commissions for major companies and organisations, including Bacardi, Penguin Books, Harper Collins, Land Rover, Barclays Bank and the New York Botanical Gardens. He also produced a series of paintings for Taylor’s of Harrogate used to illustrate the packaging for Yorkshire Tea. 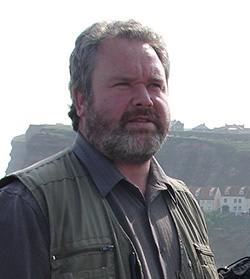