From the silver screen to much-loved TV dramas, the North York Moors plays a starring role. If it’s not the stunning coastline or panoramic moorland, then it’s the charming villages, heritage steam trains, ancient castles and abbeys that have film and TV companies knocking on our door.

North York Moors - in the spotlight

We take a closer look at some other locations you can visit for film-inspired days out.

With stunning views and stylish carriages, the heritage railway is hard to beat for a scenic backdrop.

The film adaptation of Downton Abbey: The Movie used Pickering station on the North Yorkshire Moors Railway in the film's opening scenes, and you can also catch views of the train steaming through Newton Dale, along with Castle Howard, Hovingham Hall and Ampleforth College.

The railway also featured in ‘Testament of Youth’, the BBC Films/Heyday Films adaptation of Vera Brittain’s World War One memoirs, which was shot in several locations including Goathland, Egton Moor, Fylingdales and along the coast.

Not forgetting the wizarding world’s most famous train station, Hogsmeade in the Harry Potter films, is in fact the North York Moors very own Goathland station!

And look out for Mission: Impossible 7 film and the latest Indiana Jones instalment, both featuring the railway.

Well-known as the location for both the hugely popular 1980s ITV series and film versions of ‘Brideshead Revisited’, majestic Castle Howard also turns up in the BBC’s ‘Death Comes to Pemberley’  and ‘Garfield: A Tale of Two Kitties’. In the second series of the hugely popular ITV drama ‘Victoria’, the house doubled as Kensington Palace. Most recently it appears in the biggest series ever on Netflix: Bridgerton. 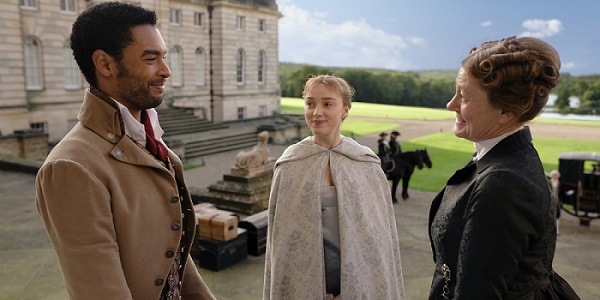 Duncombe Park also masquerades as the German HQ in the 2016 'Dad's Army' film, alongside cameos in the 2012 BBC drama ‘Parade’s End’ and the 2013 BBC film 'The Thirteenth Tale’.

The stunning ruins of Rievaulx Abbey forms the impressive backdrop for King Arthur and his metallic knights for the 2017 Transformers movie, ‘Transformers: The Last Knight’.

One of Channel 5 TV’s popular animal doctors in ‘The Yorkshire Vet’ hails from Grace Lane Veterinary Surgery in Kirkbymoorside, and often features Sutton Bank on visits out across the North York Moors.

The North York Moors took centre stage in this classic children’s adventure film, ‘The Runaways’, starring Yorkshire legend Mark Addy. When misguided father of three, Reith (Mark Addy) passes away, his children, Angie (Molly Windsor), Polly (Macy Shackleton) and Ben (Rhys Connah), are left to cope alone; Angie acting as surrogate mother. Their Uncle Blythe (Lee Boardman) suddenly returns from prison, harbouring a grudge over a long-standing family debt. With no option the three siblings and their two donkeys leave their home in Whitby and embark on a journey across the North York Moors, in a search of their estranged mother (Tara Fitzgerald).

It's an uplifting film about childhood love and loss, taking in a scenic journey from Osmotherley, towards Robin Hood’s Bay, through Sutton Bank and our Levisham Estate, including Skelton Tower. The North Yorkshire Moors Railway stations at Goathland and Grosmont also feature as the children climb aboard the train, with donkeys in tow! Through the many lessons learnt along the way, Angie, and her siblings discover for better or worse, what it truly means to be a family. Set almost entirely in the National Park, the film is available on DVD & Digital. Check their website for details.

The National Park’s dramatic coast played a starring role in Daniel Day-Lewis’s final film ‘Phantom Thread’ about 1950s dressmaker Reynolds Woodcock. To capture the atmospheric beauty of the film, locations such as the stunning fishing village of Robin Hood’s Bay, the cobbled streets of Staithes, St Oswald's Church in Lythe and the classic interior of the Victoria Hotel formed the backdrop. It's possible to walk in Day-Lewis’ footsteps along the clifftops above Robin Hood’s Bay, by venturing north on a short stretch of the Cleveland Way National Trail towards Whitby.

Sit down with your pre-schooler and see Staithes in CBeebies ‘Old Jack’s Boat’, which features Bernard Cribbins as 'Old Jack', a retired fisherman who tells stories from inside his fishing boat, ‘The Rainbow’.