Voluntary Ranger ‘thrilled’ with national award after completing over 3,000 hours for National Park 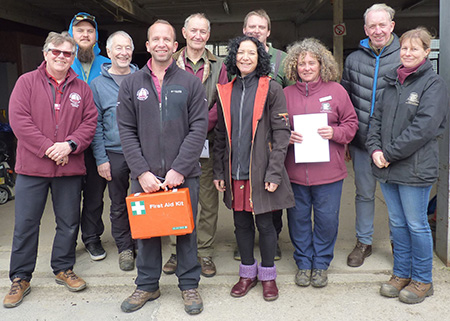 David was recognised for completing over 3,000 hours of volunteering since 2013. He is a Voluntary Ranger, carrying out weekend patrols, checking public rights of way, repairing minor problems and helping the public to enjoy their visit to the National Park. He was also one of the first Task Day Leaders in the North York Moors National Park - highly qualified volunteers who lead groups on practical tasks.

Debbie Trafford, Head of Recreation and Ranger Services at the North York Moors National Park Authority, said: “It was very difficult to nominate just one of our many fantastic volunteers, as they are all dedicated, hardworking individuals committed to the values of our National Park. We chose David this year as he has always been willing to take on the less glamorous tasks day after day and is an excellent ambassador for volunteering.

“He is always willing to try something new, to trial a new approach and give really constructive feedback. He seems tireless in his commitment and is enormously passionate about the National Park, the landscape and wildlife, and the work of the Authority - we are delighted he has been recognised.

“We will be putting more of our amazing volunteers forward for next year’s awards as they all deserve to be recognised for everything that they do.”

David said: “When I first started volunteering six years ago I did not realise what a large and satisfying part of my life this would become. My volunteering has brought me into contact with a wide variety of people, both permanent staff and volunteers, who have a huge range of knowledge and enthusiasm about the National Park. It is great to be a small part of such a passionate group of people.

“The last year has been especially rewarding for me as I have worked with young people, including excluded pupils and Duke of Edinburgh Award candidates. For the next four years I will also be helping out on the Ryevitalise project whose aim it is to revitalise the River Rye's natural and cultural heritage - none of this would I have ever envisaged before I retired.”

The four awards, including group and project bursaries supported by CLIF, were presented by Paul Rose at the Kendal Mountain Festival on Saturday 16 November. Winners were presented with their award on stage in the lively ‘basecamp’ area of the Kendal Mountain Festival, and had a chance to talk to the audience about what volunteering means to them.

The judging panel this year was made up of the volunteer coordinators from all of the National Parks and they made the following statement: “Judging these awards is a humbling experience as it gives us the opportunity to learn about so many people and projects that are making an immense contribution to the 15 National Parks across the UK. It was a difficult choice this year as there were so many inspiring entries.”

Individual winners will receive prizes including clothing provided by Columbia Sportswear and products from CLIF. In addition, a £500 CLIF Bursary is given to each of the Group and Project winners together with a selection of CLIF Bars to help their volunteer work.

About the National Parks

The UK’s National Parks are the best places to explore the British countryside. They are free to enter and explore and have 104 million visits each year. There are 15 National Parks in the UK, 10 in England, three in Wales and two in Scotland. For more information please visit the National Parks website.
@uknationalparks
Contact: Naomi Conway, naomi.conway@nationalparks.co.uk, 07950 392979

Columbia is the official apparel partner to the UK National Parks. Columbia has been creating innovative apparel, footwear, accessories and equipment for outdoor enthusiasts since 1938. Columbia has become a leading global brand by channelling the company's passion for the outdoors and innovative spirit into technologies and performance products that keep people warm, dry, cool and protected year-round. To learn more, please visit the Columbia Sportswear website.