From early February to June 2021 we asked for 'Your Views.' This was a survey which included seven questions. 938 individuals or organisations responded. We also asked key partners about what particular issues they felt were of most relevance to the future of the National Park. Our thanks to everyone who responded.

This page details the results of the 'Your Views' questionnaire. Questions were open-ended and respondents were able to answer some or all questions.

1. Is the countryside important as a place for you to visit and/or use for recreation? 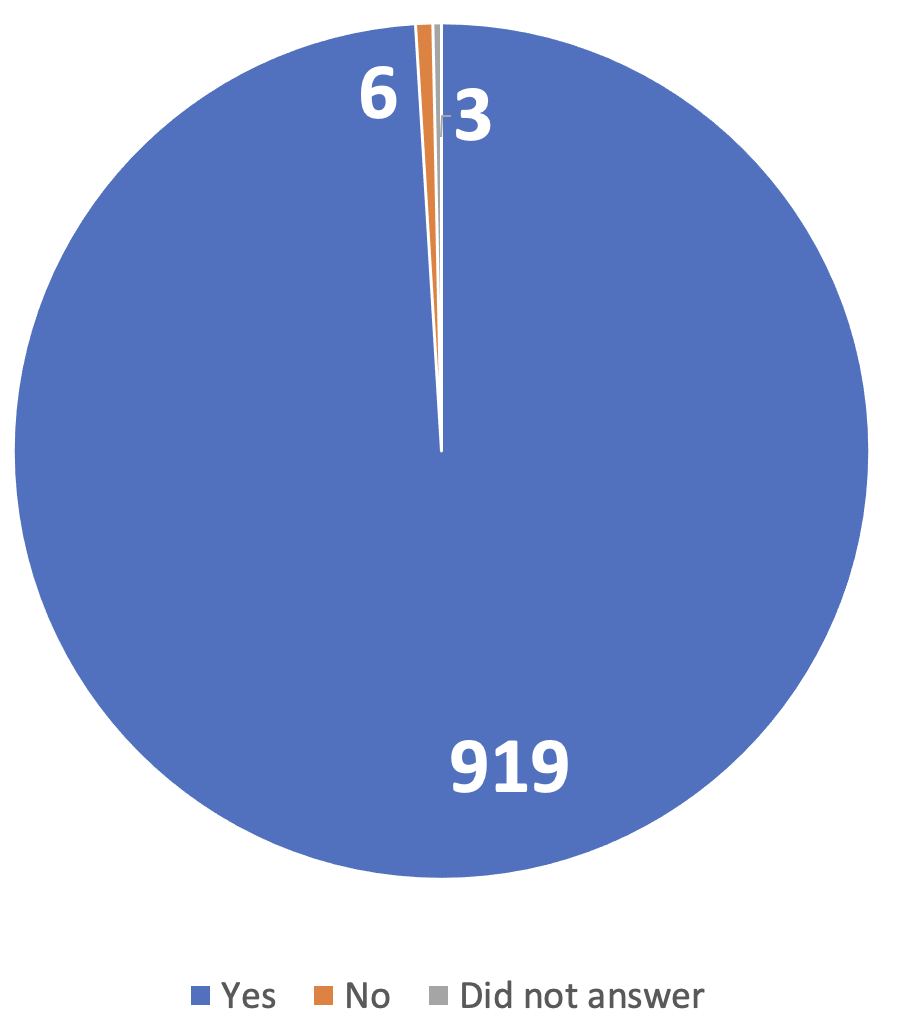 Only six people responded negatively to Question 1. Three did not answer and 919 said yes - the National Park is an important place to them.

2. Do you visit, live or work in the North York Moors National Park? 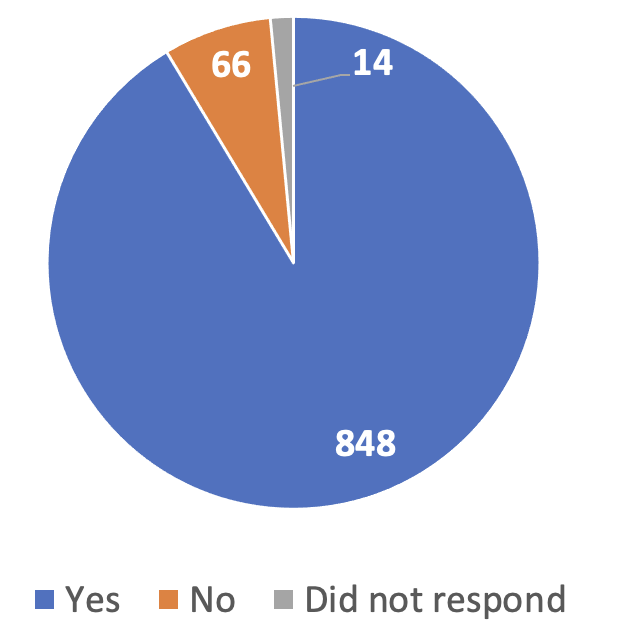 848 people responded in the positive and 66 said no.

3. What do you most value about the North York Moors National Park?

We asked this question as we wanted to know whether the people replying agreed with what we thought was most valued about the National Park. 732 people responded to this question, offering 1,554 responses. The following categories elicited five mentions or more: 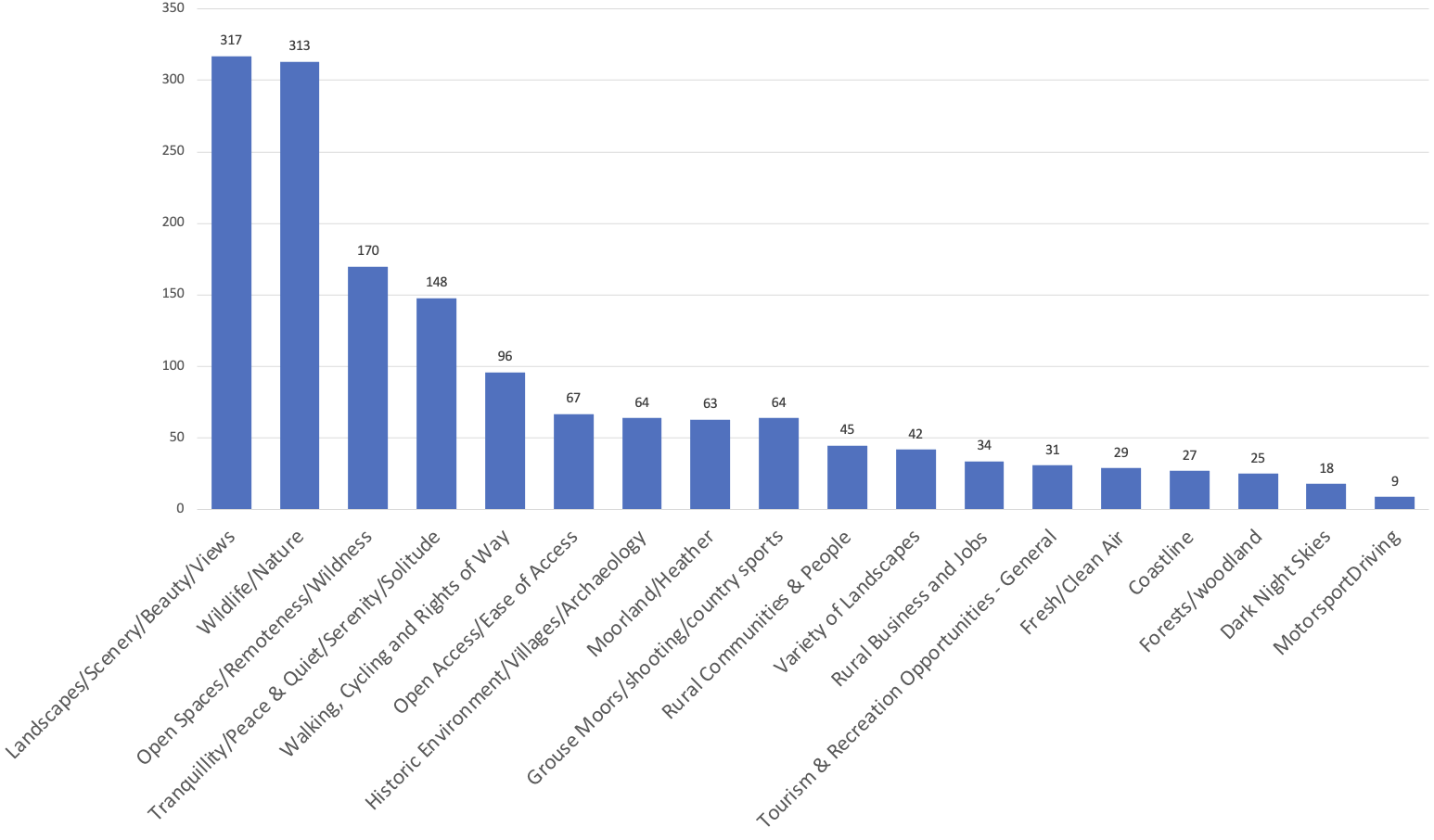 Landscape, scenery, views and wildlife and nature came out top, however there was also a strong response from people valuing the sense of tranquillity, serenity and peace and quiet that being in the North York Moors offers. People also commented that they valued the heather and moorland, and also opportunities for shooting and country sports.

4. What would you enjoy doing, if you had the chance to visit the National Park?

Few responses were given (50), but more than half (30) mentioned walking: 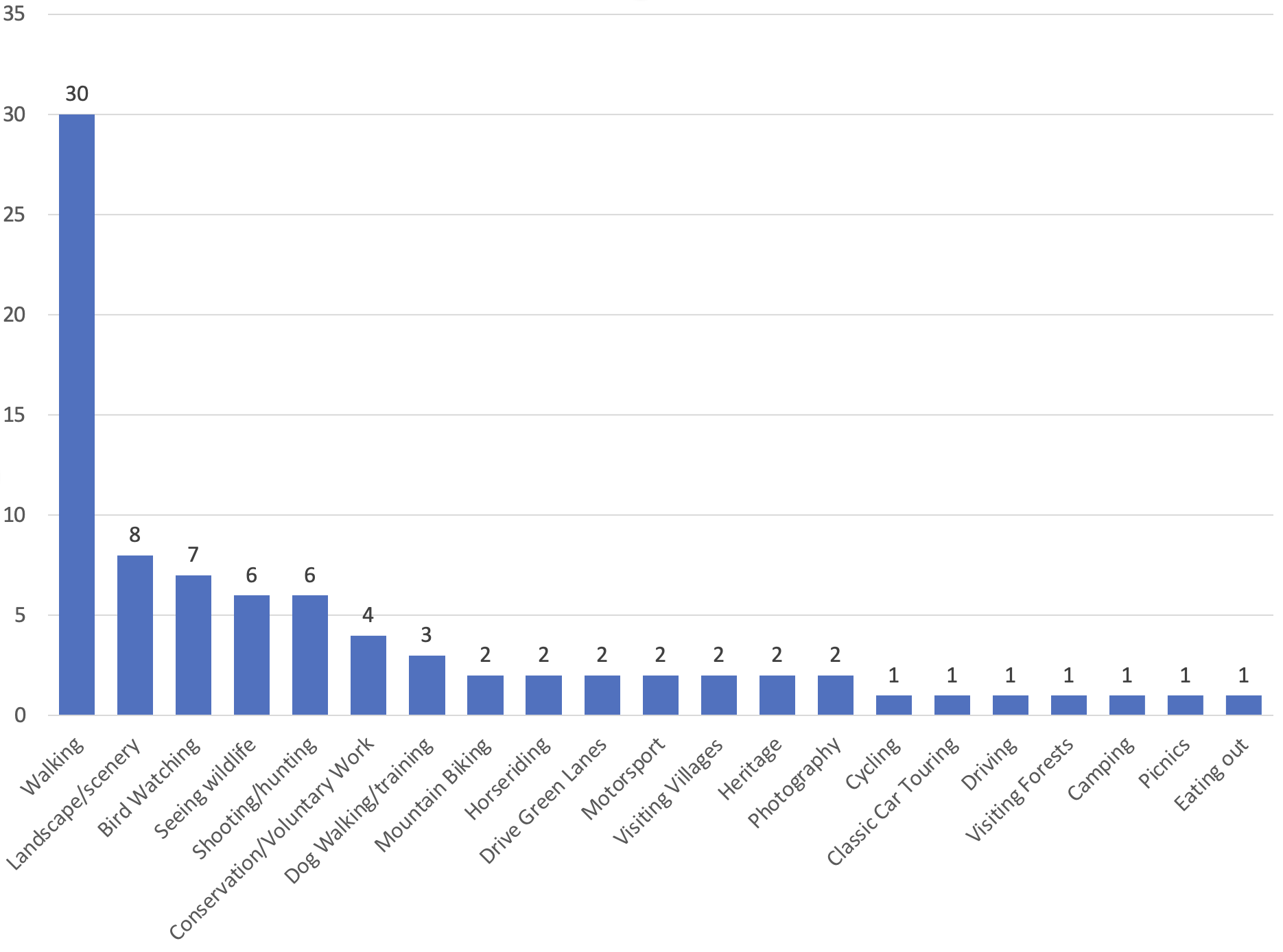 5. Has anything stopped you from visiting the National Park? If so, what?

Only 43 responses were received, with 11 stating that there has been nothing stopping people form visiting the National Park, indicating that few people thought there were many barriers to entry.

6. What do you think are the main challenges facing the National Park?

The question asked about the challenges facing the National Park. 701 people responded to this question (76%), and 1,240 comments were made. The following issues were mentioned most: 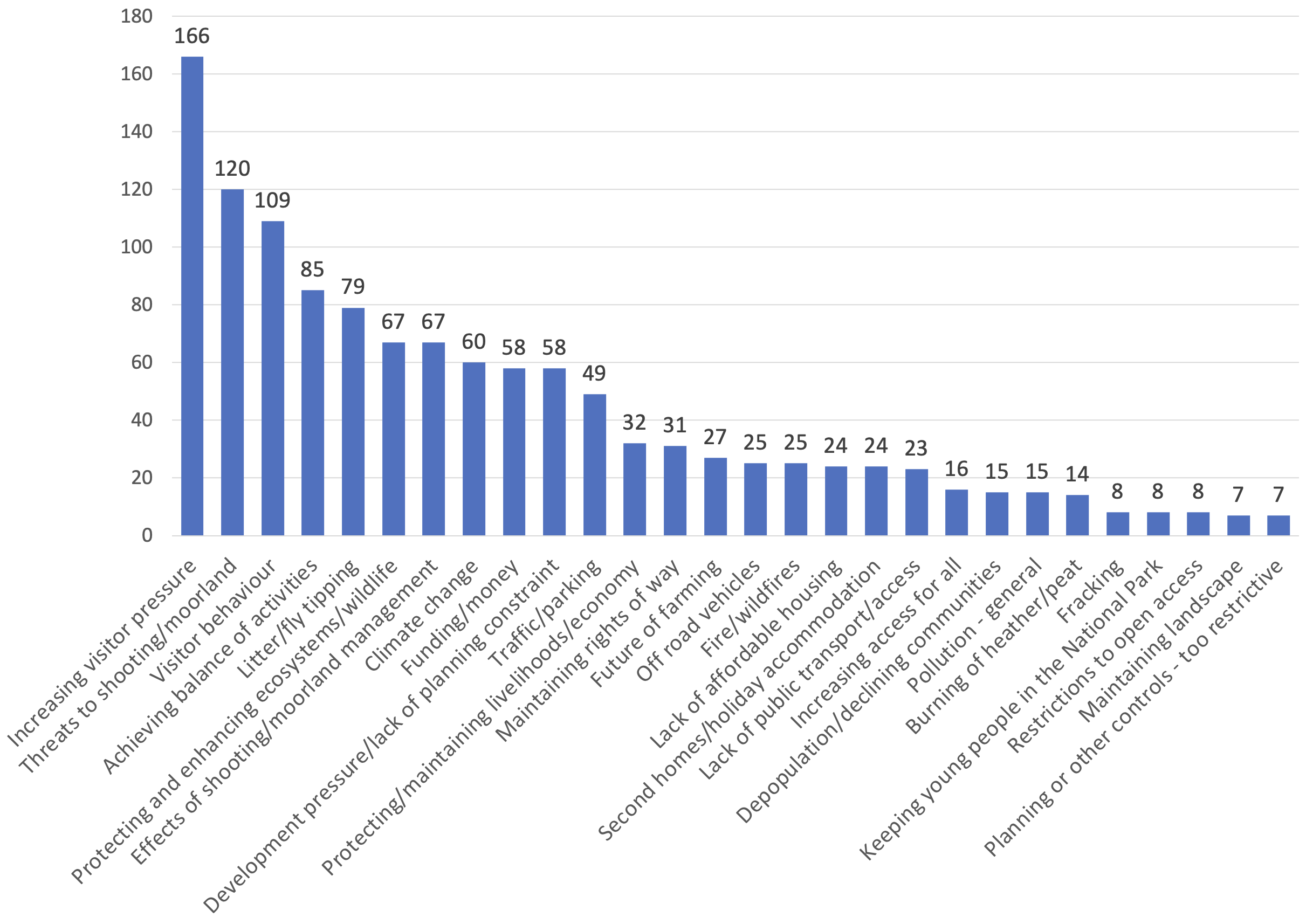 (Excludes issues which were mentioned five times or fewer).

The two biggest areas of comment were around visitor pressure/behaviour and around shooting and moorland management, both receiving comments 'for' and 'against'. In the graph above comments are separated out into comments around visitor pressure in general, and then around specific behaviour, including issues such as littering and parking. It is likely that visitor impact would have been at the forefront in the minds of many over spring 2021 when the COVID 19 pandemic was restricting people's movements. There were many comments which used phrases such as ‘lack of respect’ (27 people used the word ‘respect’), 'too many people’,  ‘disturbance’, and references to fires, loose dogs, people leaving gates open etc. On moorland management, many comments were received both supporting this sector and in opposition to it - the feedback was very polarised.

7. Thinking about those challenges, what do you consider needs to change in the next 20 years to secure the National Park as a special place for future generations?

668 people responded to this question, providing 958 comments. Questions were ‘unprompted’,  i.e. respondents were not asked to select from a list of issues and instead could give any answer, hence the following issues were those most foremost in the mind of responders. The main areas for comment were around: 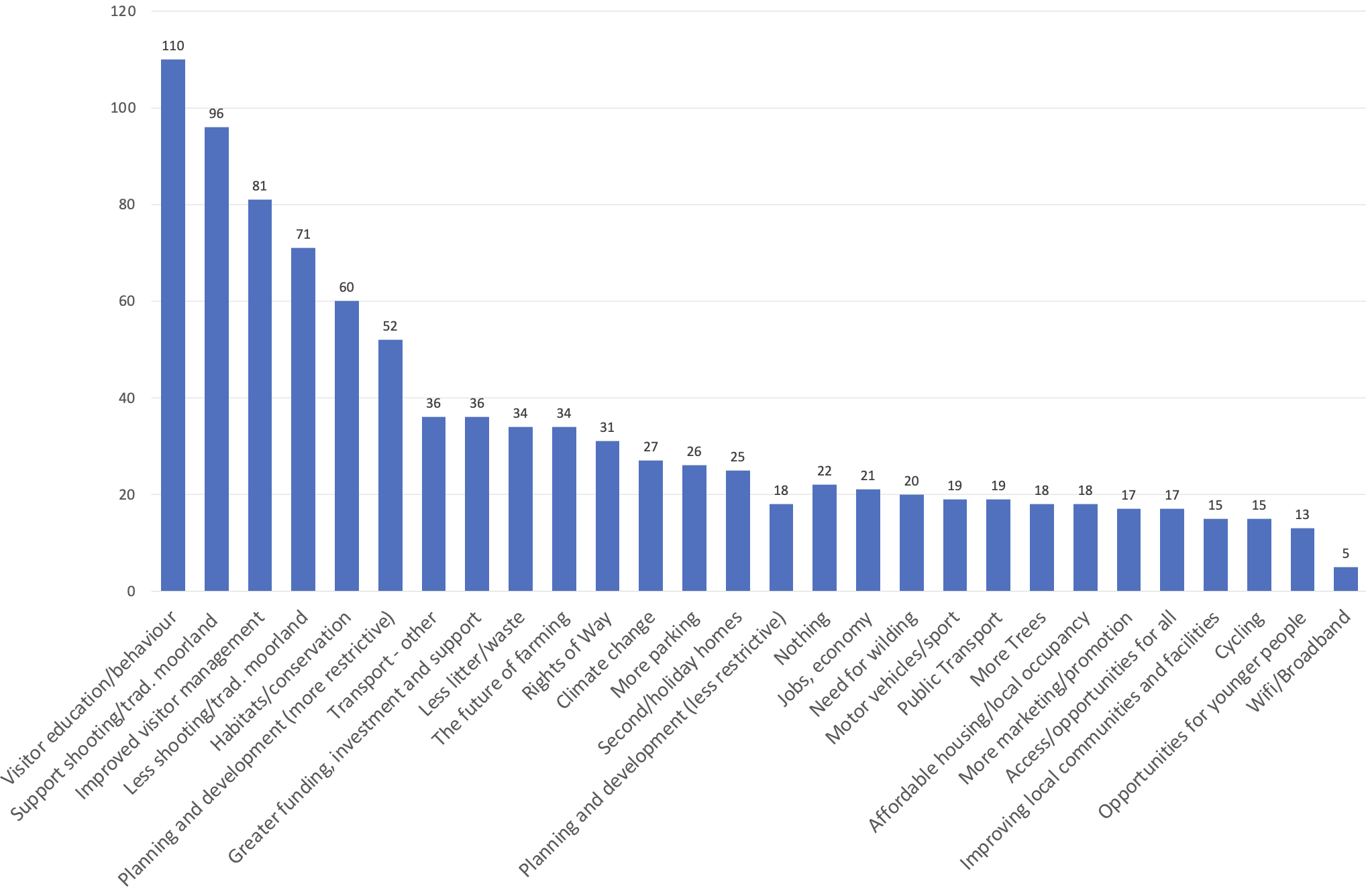 Again, similar to the responses to the previous questions the two main areas that came up were around visitor management and behaviour and around shooting and moorland management – both for and against.  37% of comments related to these issues.

There were 110 responses highlighting visitor education and behaviour as a challenge for the future. Around half (57) commented generally or gave a short response that education about the National Park was necessary. 15 responses mentioned the need to target schools/young people in particular. 18 mentioned a need for education to improve behaviour. 8 mentioned they wished to see more fines and enforcement and 7 said there needs to be a better understanding of field sports, farming or country ways. 8 mentioned litter, dog waste or the need for more bins. 7 specifically mentioned the need for more education on the value of wildlife and other environmental issues such as climate change.

There were 96 views which expressed support for traditional moorland management/shooting/field sports and that further support, understanding or reduced interference with traditional moorland management and associated pursuits was needed.  This was to an extent balanced by the 71 responses who expressed opposition and concern to such activities. 40 of those comments were comments around banning, stopping or reducing shooting, three mentioned pheasant shooting, however the majority were concerned about grouse shooting.

There were 60 comments relating to habitats/conservation. There was no common theme to these comments beyond a desire to protect and enhance biodiversity and habitats. Suggestions for how this may be achieved included promoting their importance, connecting wildlife corridors, working with estates on sustainable shooting, helping people plants trees and hedgerows, protecting grassland for ground nesting birds, more surveys (including SSSIs), continuing upland management schemes, bracken control, delivery of new Environmental Land Management funding programmes, more protection from development, fire management, grazing with horses, cattle and pigs and less sheep grazing.

There was a mix of responses on planning and development. 52 comments were received arguing more restrictive planning controls are needed. 9 people mentioned new house building in particular, with one saying what was being built was not affordable or for locals or for older people only. There were 18 responses saying that planning should be less restrictive in the National Park. Reasons for this included building new homes, including to bring greater investment and more and younger people into the National Park (4), that disused farm buildings or other disused heritage assets should be redeveloped (6), that planning was applying too much uniformity of design to diverse styles of village (2), or that either eco houses or well-designed modern sustainable architecture should be allowed. 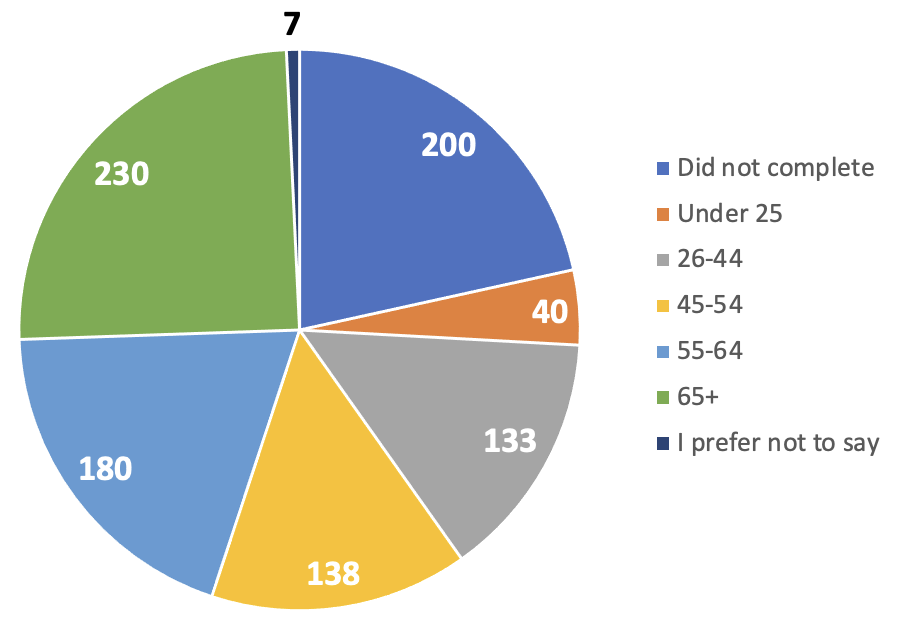 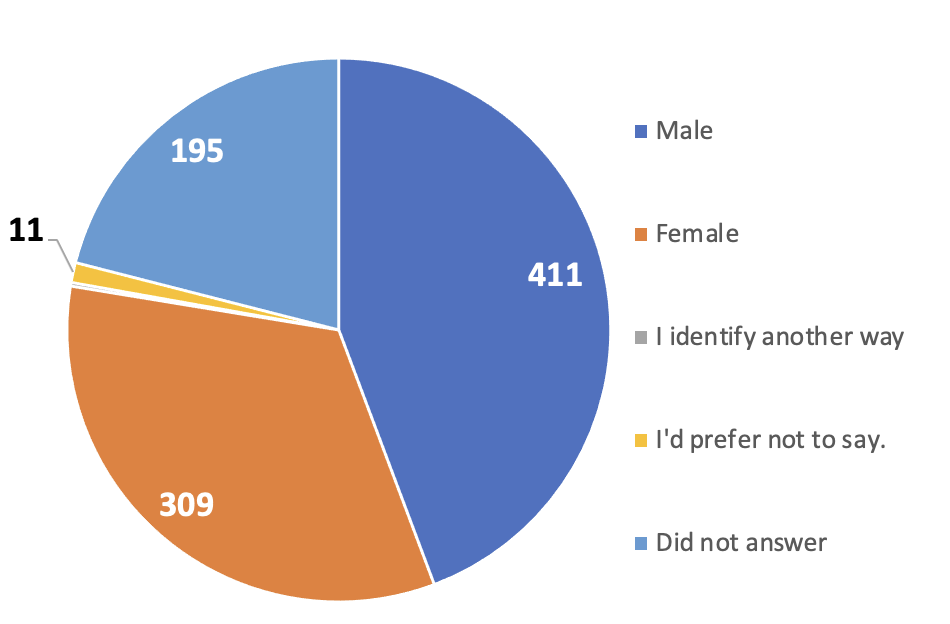 Finally we asked people to provide a postcode. 354 (38%) did not and some provided a partial postcode. 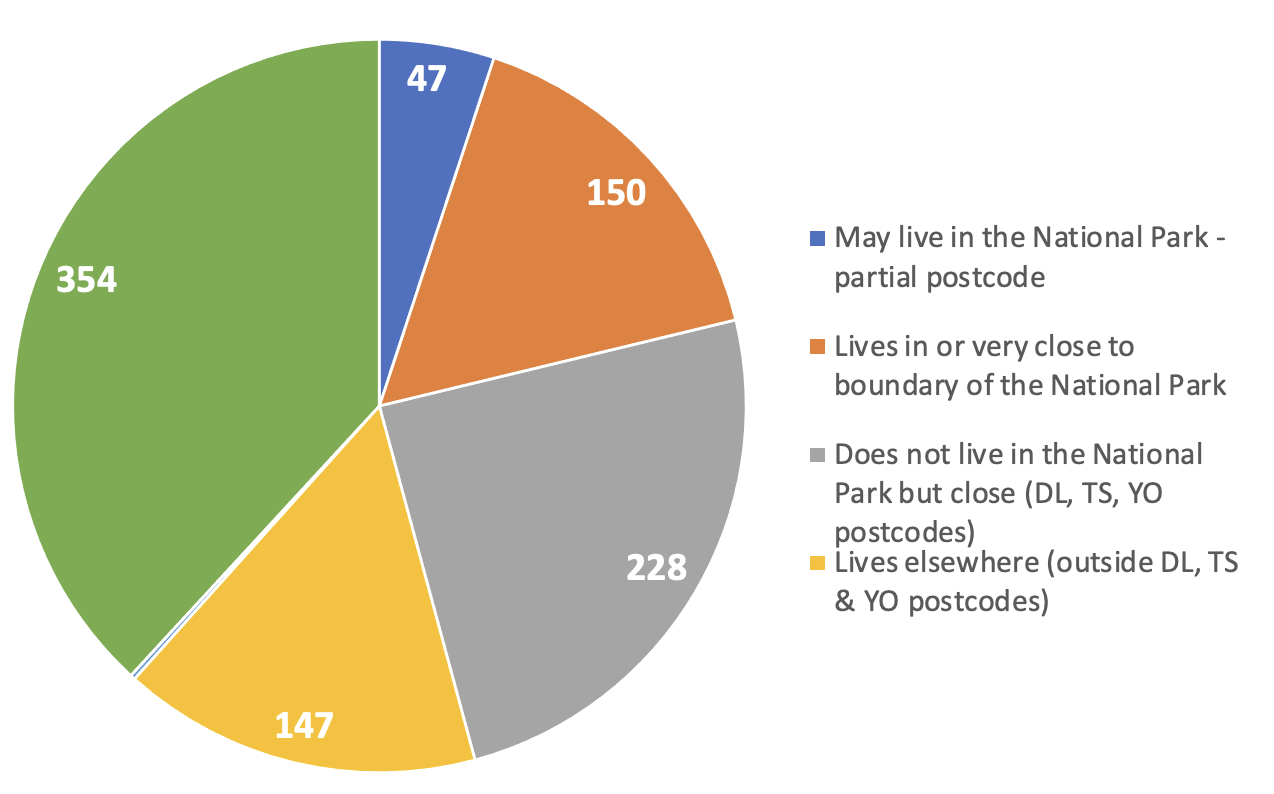