John Freeman came to Whitby in 1969 from Doncaster – where he had studied at Doncaster School of Art and taught for five years – and opened Abbey Galleries, which has been his studio and gallery ever since. Over the last five decades he has created more images of the Whitby area than any other living artist.

His work is mainly in watercolour, with the subject matter drawn from the town and the surrounding villages, farms and moors. John’s love of detail, combined with a strength of colour not normally associated with the medium, make his watercolours immediately recognisable.

In 2011, John embarked on a major project recording the River Esk, from its beginnings high above Westerdale down to its meeting with the North Sea at Whitby’s harbour mouth. The resulting book, ‘A Meander Down the Esk’ (published in 2014), features his paintings, drawings and supporting text – the paintings showing the Esk in all seasons and at all times of the day; the fine pencil drawings depicting details along the river, including its wildlife.

I find the immediacy of watercolour exciting and stimulating. It enables me to combine my love of detail with broad areas where pigment, paper and water create their own qualities. During my meander down the Esk, I found that the river gave me a wonderful opportunity to enjoy this medium to the full. The movement of the water, contrasting with the bank-side structures, offered me the chance to create something very personal, and in this work you see the river through my eyes. 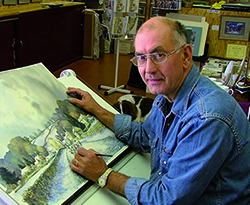