Thursday 19 April to Monday 21 May

Pam Scott, Ian Nicholas, Sally Nicolas and Anthony Cox find diverse inspiration in the North York Moors. Each has a distinctly different style and point of view when putting paint to paper. The exhibition is complemented by a display of fused glass jewellery by Sally Nicholas and sculpture Anthony Cox. 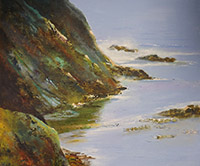 Pamela has been painting in different mediums for some years, having studied with and gained inspiration from leading artists in the North Yorkshire area. She is mainly self-taught.

She specialises in watercolour and acrylic, and her work is colourful, soft, atmospheric and harmonious. Her favourite inspirational place in Yorkshire is the view when travelling towards Castleton from Guisborough.

Pamela is a member of The Priory Art Society in Guisborough and The Leven Art Society based in Stokesley. 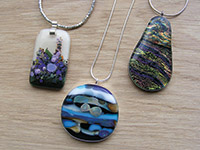 Sally Nicholas has been making jewellery as a hobby from the age of 11. She gained a BSc in Applied Consumer Sciences and then spent a number of years working in the food industry in Quality Control. Sally currently works part-time in order to pursue her interest in glass-fusing and lampworking

Sally fuses glass using a digitally controlled kiln. The temperatures reach over 800˚C so that the layers of glass fuse together. Many of the glasses used change colour when fused so the end product is often a surprise. Sally uses dichroic glass, which has two colours – a transmitted colour and a reflected colour. Once the piece of glass has had an initial fusing, Sally shapes the glass and then re-fires the glass, ready to be turned into a piece of wearable art.

Sally is inspired by the work of the Diana East and Jo Rohrer. She also finds inspiration from many of the artists who work in mixed media. Her favourite place is Runswick Bay, where she loves sitting on the benches near the Fisherman’s Institute and looking out over the Bay 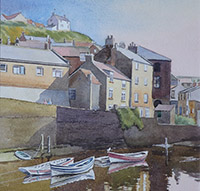 Anthony Cox has a love of art that began at a very early age. In the mid-1960s he was greatly inspired by the Welsh-Canadian painter, Llewellyn Petley-Jones, under whose tutorship Anthony learned to paint in watercolour. He has since developed his pictorial work further in oil and pastel.

Originally from the south of England, Anthony moved to the northeast in the late 1960s. Whilst at teacher training college in the early 1970s he not only took art, but specialised in sculpture and ceramics, and he now splits his time equally between painting and sculpture.

Anthony is greatly inspired by the area in which he lives. Naturally occurring compositions often stop him in his tracks, whether it’s the lay of the land or the look of the day. He tries to have a camera with him at all times to record such moments. He is often attracted to scenes with a pathway leading the viewer in, and enjoys painting water and reflections.

Most of his sculptures are inspired by the human figure and are modelled in clay without an internal armature. They are then hollowed out before firing in the kiln. The stylised pieces are mainly slab built and then worked on further. Silicone rubber moulds are made from the fired sculptures and limited editions are then cold cast in bronze resin.

Anthony is a long-standing member of several northern art societies and a founder member of the Guisborough-based Priory Arts Society. He exhibits regularly in society exhibitions and one-man shows. He is represented by several galleries in the northeast and has paintings and sculptures in many private collections in the UK, Spain, Sweden and the USA. 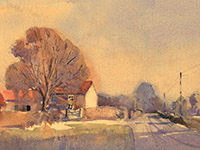 Ian has enjoyed drawing from an early age, and was later introduced to colour by watercolour artist Colin Swinton. He has no formal training in art. It is his interest and passion for painting that drives him forward

He usually starts by sketching out the subject and using masking fluid to mask out any areas where he needs to preserve the white paper. He then stretches the paper, soaking it in water and sticking it down to a board with gum strip – this is to prevent the paper from buckling when watercolour is applied. When dry he applies a wash of clean water and then starts to build up the finished painting using techniques such as wet into wet, wet on dry and dry on wet.