January may mean frosty winter days, early dusks, and bare trees and hedges, but that also means it's easier to see flocks of birds and other wildlife. 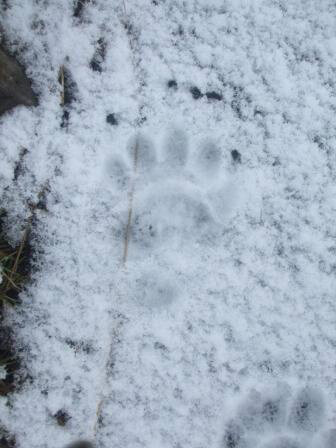 Hone your detective skills and make the most of any snow with a spot of animal tracking, looking for signs of hungry mammals and birds.

Mice, voles, rabbits, brown hares, red fox, squirrels and otters will all be out looking for food.

Badger prints are similar to dogs, with the same rear pad and toe pads, although they have five instead of four.

Badgers also have longer claws than dogs that will leave a noticeable imprint.

Crossbills have a head start and will already be looking to breed because their food of choice – conifer seeds – is ripe and available throughout winter. As its name suggests, the upper and lower parts of its bill are crossed over (though you'll only see this through binoculars or at close range). The adult male is reddish in the upperparts and under parts. The female is greenish-grey, lightly streaked. Flocks can be seen feeding in pine forests like Boltby, Cropton and Dalby.

A perfect time of year for a frosty walk – combine one of the circular walks from Welburn in the Howardian Hills with a visit to the grounds of Castle Howard, which is open all year round.

The experts at Yorkshire Coast Nature are our eyes on the ground, here's Richard Baines' tips on what else to look out for as 2021 begins.

Mid-winter in Grimsby is not necessarily the time or place I expected to experience one of my most memorable natural encounters!

It was late afternoon on the 16th December 2021. I had just finished a bird survey on the south side of the Humber Estuary but I was going nowhere. The tide was rising and the sun was setting across a vast landscape bursting with life and awash with colour.

Thousands of wading birds were being pushed higher up the tide line by the rising water. Black-tailed and Bar-tailed Godwits, Dunlins, Redshanks, Curlew, Grey Plover and Lapwings created a dense mass of bodies over the vanishing mud. Every single bird was feeding for as long as possible, jostling for position within a tightening world.

I was waiting for that special moment, lift off! This time last year I was in the right place at the right time to see thousands of Godwits swarming around the mud and I was hoping for another opportunity to photograph these amazing birds. But in typical form nature had other ideas, there was no Godwit flight, this time it was the turn of Red Knot to steal the show.

At 4pm a group of Knot, I estimated around 200 birds, took off and flew low across the scene. They twisted and turned in an open flock performing tight manoeuvres always close to the water or mud. On occasion the flock broke up into smaller groups before very quickly coming back together, tighter and closer, then suddenly they would break up again, each movement at speed almost touched the waves.

Then a change as the flock moved higher, no break ups this time as the space between individual birds was being reduced. Shortly afterwards the flock moved further away over the outer shoreline gathering speed and height. 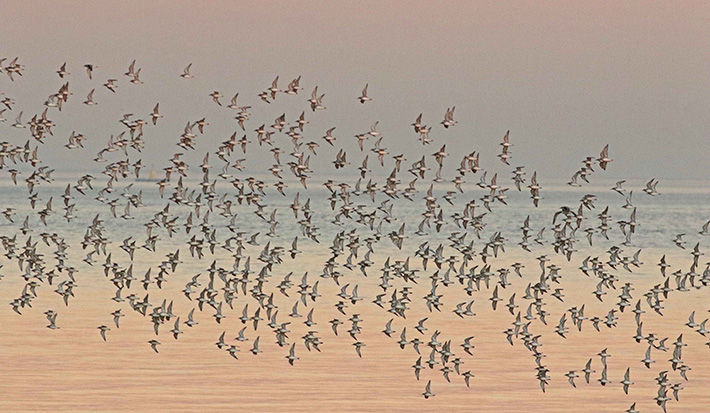 Then what I can only describe as a ‘power ball’ of birds formed. This amazing structure moved as one. No murmuration, no distraction. These birds knew exactly where they were going, they were on the move across the estuary and within no time at all they had gone. They left me in awe and hoping I captured some of the experience in my photos. 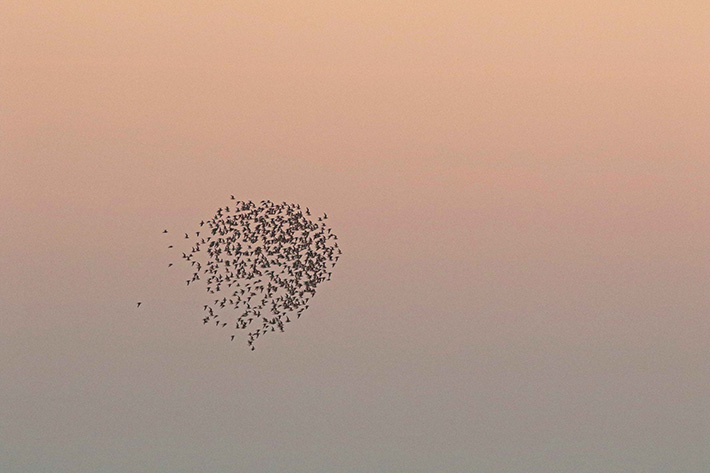 When I checked, my last view of the flock was at 4:30pm. The whole performance took 28 minutes from lift off to power ball. At no point was the flock disturbed by predators or people, I remember thinking wow! this was as natural an experience as I could have wished for. Self-organising collective behaviour at its best. At home I tried to count individual birds on my screen, I got over 500 and I had not even photographed the whole flock!

It must take an incredible amount of high energy practise and amazing skill to get this right. Sensory functions and flight mechanics all working overtime and at great speed. Acting together, these birds were able to fly faster, navigate more effectively and better protect themselves from predation. The results of thousands of years of adaptation. I am now slightly obsessed with learning more about flock dynamics. I am sure I can do that but finding another power ball may be more difficult…