Autumn is fading and winter starts to take hold, leading to beautiful misty mornings. Acorns and other nuts litter the woodland floor. Many migratory birds have headed off while others start to arrive from the continent, making the North York Moors their home for the winter.

Leaping salmon, now it's time for the annual salmon and trout runs as they return from the North Sea to the rivers of their birth, heading to their breeding grounds to spawn. The river Esk is one of only a few rivers in Yorkshire that supports salmon. Females lay eggs in gravel bedded streams and the male fish fertilise them. The fittest fish can leap an incredible 3 metres to negotiate waterfalls and rapids on their journey upstream. In some places specially designed fish ladders have been put in to help them climb up weirs. Salmon Leap point on the river Esk in Sleights is a good place to see salmon launching from the water to breach the weir, when the water is running fast and high.

Get a birds-eye view of gorgeous Harwood Dale from the escarpment edge on a circular walk that starts and finishes in Broxa Forest and follows mostly good stone and gravel tracks, good for this time of the year. Tree-felling has opened up the views on the first part of the walk, and you really feel on top of the world as the path swings round the scarp edge.

Here's what else Richard Baines, one of the experts from Yorkshire Coast Nature, say you should be looking out for this month. 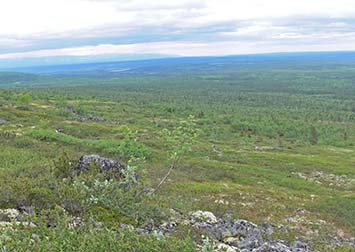 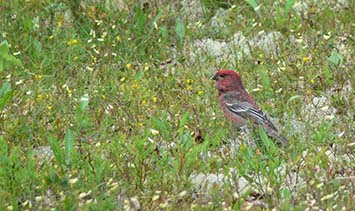 On 13 July 2008 I was lost in the Boreal Forest of Russia. I was supposed to be surveying breeding birds, but the mosquitoes had got the better of me so I went off-piste and climbed a hill to catch the breeze. At the top of the hill, I realised I had lost my way so I stopped for a break and looked out over the vast expanse of land. It was a truly awesome sight! Arctic forest covered the whole 360° view, stretching as far as I could see. Small lakes amongst the trees were the only change in form. I remember thinking that this is what a real wilderness looks like - I was totally captivated.

The sweet song of Pine Grosbeaks caught my ear. A male and female - two shining jewels sat on a nearby rock. I sat down to watch them, as well as a male Bluethroat without a care in the world. I was tiny and insignificant among this wild, dominant landscape, but I felt a hugely powerful sense of calm.

Suddenly the Grosbeaks flew up, disturbed by a calling raptor circling above me. An angry Rough-legged Buzzard twisted and turned above the hill and nearby trees - I must have been close to its nest. I laid back on the rock and watched it through my binoculars. As it drifted away over the forest, I noticed a thin line of smoke rising above the trees, a lifeline to follow for my journey back to our camp. I had never been so close to a Rough-leg before and what an amazing place to experience it!

My next close encounter was of a very different kind. Leading one of our Yorkshire Coast Nature (YCN) Birding Day trips on 1 November 2014, I took our group to see a Rough-leg, which was hanging around a grass verge in Grindale on the outskirts of Bridlington. The presence of voles, mice and roadkill kept this bird going for many weeks attracting lots of admiring birders. I wrote the following notes in my journal a day later:

'Our lunch stop was cut short by news that the Rough-legged Buzzard party had started! Within a short time, our group was being treated to possibly one of the best raptor shows this side of Jurassic Park! This amazing bird hovered fearlessly above the hedges and roadside verges, at one point plunging down onto a vole right in front of one lucky photographer! It’s no exaggeration to say that in over 30 years of birding I have never had such close views of a wild bird of prey.'

Rough-legged Buzzards occur every winter in the UK with small numbers seen in Yorkshire each year. The Grindale bird arrived in typical fashion on the coast having travelled across the North Sea. It was first seen coming in off the sea over the cliffs of Filey Brigg by my good friend, and YCN guide Mark Pearson.

Annual winter abundance of Rough-legs in our country depends on how many travel from Northern Europe, where they are affected by prey availability in late autumn. When they reach us, they can be found hunting among open land from anywhere to the moorlands of the North York Moors National Park, to the flat farmland of East Yorkshire. Look out for their distinctive black and white tail and beautiful underwing. Also, check out any buzzard-sized bird of prey hovering like a Kestrel. Common Buzzards hover occasionally, but nowhere near as much as a Rough-leg.

It feels like a long time since we have had a Rough-leg winter. I will be keeping a keen eye out in the hope this winter is the next one!