Jo Barry studied at Ravensbourne College of Art and Design. After graduating, she taught in a boy’s comprehensive school, rented a flat on the edge of Battersea Park and kept a horse in Kent. Inspired by her riding in Kent, Jo produced very detailed pencil drawings and exhibited three of these a year at the Royal Academy Summer Exhibition – until she had so many galleries showing her work that she could give up teaching and become a full-time artist, producing pencil drawings, etchings and watercolours. In 1994, with her husband and small son, Jo moved to the New Forest where she continues to live and work. She is a Fellow of the Royal Society of Painter-Printmakers. 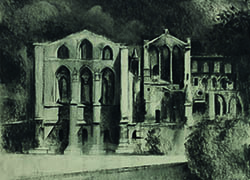 John Creighton comes from a family with a strong artistic tradition going back several generations. After a degree in Fine Art Painting in Manchester, John was inspired and encouraged by the landscape painter Keith Grant and, following his return home to Ryedale, John established his studio where he continues to develop his artistic vision.

John’s charcoal landscape drawing is part of a series titled ‘The Call of the Land’. To John, these works represent doorways to a dimension of mystery, to a source that has no name, which lives and breathes through all things. The charcoal touches the paper like a bow on the strings of a violin. The spirit responds to the sweep of the land and the heart is transfigured with the light on the fields.

Artist Vienna Forrester has been developing her unique fractal art techniques since 2004. Her work has been described as ‘stunning’, ‘vivid and attention-grabbing’ and ‘beautiful, mysterious and metamorphic’. Her unusual approach to image-making results in vigorous, explosive colour formations. Using latitude, longitude and the time/date stamp from her digital photographs as integers, she produces fractals, which are further manipulated to represent aspects of place. What evolves is a fusion of two distinctly differing fields – the absolute rules of the fractal algorithm and the imagination of the artist.

She is inspired by patterns in the natural world. Wild, unspoiled places feature in her work, and ocean waves, vast expanses of sky and beautiful vistas fascinate and energise her. Her aim is to capture colour, movement and a feeling of 'being there'.

Chris says:
I have always been drawn to art like a moth to a flame, but becoming an artist was almost accidental. I originally established myself as a potter and bought Grosmont Gallery in 1998. When ‘foot and mouth’ struck in 2001, and the countryside closed down, was when I discovered it’s walkers who buy pots and I had to face up to the prospect of returning to my original career as a chemical engineer. Knowing I had only a limited amount of time before finances caught up with me I decided to throw caution to the wind and do what I deeply desired to do. I started stretching large canvases and let rip with the palette knife – and I haven’t looked back. My inspiration comes from a deep love of the big outdoors and trying to capture its tranquillity. We all live such hectic lives and sometimes it’s important to savour the solace of a peaceful walk somewhere beautiful. 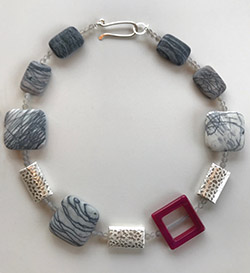 Melissa began designing jewellery nearly twenty years ago from a room in her Perthshire home. Now based in Devon, she has a new workspace in which to create and be inspired. Over the years the enterprise has travelled with her from Cornwall to India and Africa and inspiration has come from the stones found on Cornish beaches, the stunning colours of Rajasthan, the gentleness of Kerala, and the back streets of Stone Town in Zanzibar. She loves the creative and bold use of colour seen in remote parts of the world, as well as the soft balance found in nature.

This inspiration is channelled with an intuitive and artistic eye to complement and enhance pieces designed for each season. The seeds of some of the most successful designs continue to be drawn from a wealth of life experiences and from the astonishing breadth of different colours, shapes and markings on the stones she works with. There is always something wonderful in the world to inspire a new piece of jewellery.

In the past she has designed jewellery for a Titian exhibition at the National Galleries of Scotland. She has worked with dress designer Chrissie Clyne making pieces for a catwalk event in London. She designed a line of jewellery for the National Trust of Scotland and over 4 years she designed collections three times a year for a retail fashion company. Now she works making individual pieces for galleries.

Liz Samways was born in London, moved away to Leeds University and never went back. She has a degree in Art History, and a career background in sales and marketing, but later trained in garden design while developing her jewellery and printmaking practice.

Liz works in etched, engraved and enamelled silver and copper, along with other metals as the inspiration takes her. Sterling silver is combined with copper and brass, while on some pieces layers of vitreous enamel are used in a painterly way to add elements of colour. She is constantly experimenting with photo/printmaking techniques to incorporate spontaneous mark-making from jewellery into print and vice versa. 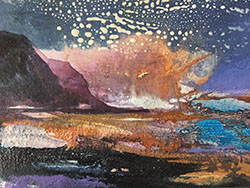 Debbie Loane was educated at Bretton Hall, Leeds University and gained a BA (hons) first class degree in painting. Following a spell in Durham where she was artist in residence at St Cuthbert’s College, Debbie relocated to York where 12 years ago she set up The Lund Gallery where she is now based. The landscape of the North, particularly the North York Moors, North Pennines and north east coast form the basis of Debbie’s work. She is interested in conveying a sense of movement and time, a narrative of journeys made and the story of place, together with the physical materiality of place all of which combine to make a lasting impression on the psyche. Current work is also informed by the industrial archaeology of Weardale’s mining and quarrying heritage.

Resulting work takes the form of drawings in a variety of black and white media as well as larger scale pieces, often incorporating found materials and minerals. They can vary in style and although bordering on abstraction at times have their roots in the English Romantic landscape tradition.She is currently Artist in Residence on the Cleveland Way National Trail making work to celebrate its 50th Anniversary in 2019.

Sue Morton’s work is motivated by her life-long fascination with vernacular buildings, both great and small (and in various states of dilapidation), and with the ever-changing moods of the coast. Sue trained in the arts, worked in the museum and arts sector, and ran an historic house educational museum. For more than 15 years she was associate and then principal of an historic buildings consultancy, painting and exhibiting when she could. Finally, longing to return to her roots, she gave up the 'day job' and came 'home' to Whitby to paint full time.

Peter Reynolds has had a lifelong interest in wildlife and natural history. When not painting, Peter spends his time watching, photographing and sketching the flora and fauna around his home on the edge of Newtondale and the surrounding moors. Along with detailed acrylic paintings Peter enjoys using strong tones and negative painting techniques to capture the often intricate shapes of decaying natural objects otherwise overlooked by the wildlife painter.

Dennis Roddam’s artworks and ceramics capture the natural spirit of North Yorkshire, from vast moorlands to magnificent coastline. Rather than depicting large panoramic views, his art focuses on the smaller natural wonders that are sometimes overlooked This reflects his in-depth passion for the region, where he’s lived since childhood. Having spent his early years rambling around the North York Moors, Dennis is now able to devote a lot more time to pursuing his art in this wonderful countryside.

As well as exhibiting widely, Dennis’ work has been regularly shown at the National Exhibition of Wildlife Artists, where he won the ‘Birds Birds Birds’ gallery award. He has also had work accepted for the Artist & Leisure Painter Patchings Exhibition (winning the prestigious ‘David & Charles Award’), and also qualified as a finalist in the BBC Wildlife Artist of the Year competition.

Sue Slack’s colourful paintings are inspired by the moorland landscapes that surround her. She experiences a fundamental connection to the land by walking and sketching as she goes, observing the way that even familiar landscapes change according to points of view along a journey. Sue’s current work is an attempt to marry her emotional response to a familiar landscape with her desire to express herself in vibrant colour. Sue’s enthusiasm for fell running is currently taking her to new places, both mentally and physically. She spends more time than ever out on her beloved North York Moors, before returning armed with a sketchbook and a more intimate knowledge of the shape and nature of the land, both of which are intrinsic to her work.

Sue says:
My interest in art started at a young age, and I received lots of encouragement for my early drawings and sketches. But it wasn’t until I was well advanced in my science degree that I discovered the intensity of colour and saw geometrical structures revealed under the microscope. The endlessly renewing configurations in the vast moorland of colour, shape, texture and pattern are but a reflection of the movement of all those tiny cells and particles that make up the elements of living matter.

Wendy Tate is an artist living in Scarborough, where she runs Alma Printmaking Studios.

Wendy says:
I am fortunate enough to live in North Yorkshire, and am able to walk daily on the beach and in woodland. The changing light, landscapes, seasons and weather all have an impact upon me, and I often feel compelled to capture these through compositional choices, colour and mark-making. My work also reflects the emotions I feel - joy, melancholy, sadness, memories – and my hope is that some of that comes through to the viewer and they can find an affinity with it. 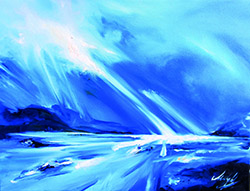 Since moving into the village of Glaisdale, in the North York Moors National Park, artist Adrian Wright has created a selection of paintings known as ‘Moors Moments’.
Adrian uses a limited palette of colours, typical of the moorland landscape, and portrays the area’s moody and dramatic skies. He concentrates on the coast, the North Yorkshire Moors Railway and the Esk Valley as his subject matter.