Midwinter and the year's shortest day beckons, but the robins will still be singing and there's plenty of bird activity still. Wrap up warm and you'll still find lots going on or if you prefer a warmer option, we've bird watching facilities inside both our centres at Sutton Bank and Danby.

Waxwings: These colourful invaders from Scandinavia may well arrive in large flocks – or ‘iruptions’ during the winter here on the hunt for ripe winter fruit. A beautiful peach and russet feathered bird, with a pronounced crest, black mask round its eye, it has yellow wing tips which are visible once you get the binoculars on them. Busy and flighty, they will be in a flock, gorging on berries like rosehips, rowan, holly and hawthorn. Head into Troutsdale for a chance to see them. With a curious ‘bubbling trill’ of a call you’re likely to hear them before you see them.

Hutton le Hole is as pretty as a picture in the snow, but even without the white stuff, this is a charming walk on country lanes and moorland tracks, returning across the Spaunton escarpment for some lovely sweeping views. A cracker for a crisp day, with a country pub in both villages!

This month Richard Baines from Yorkshire Coast Nature recounts how his opinion changed about the Spruce tree.

I once read there are only three things certain in life; birth, death and change. I don’t remember where I read it but that’s not important, what keeps me smiling is observing the power of all three in nature. This is a personal story which I think is just as much about our nature as it is about the wildlife around us.

In the late 1980s whilst studying ecology, I learnt that all non-native species were bad. A great example of this was the Spruce tree, two main species planted in the UK; Sitka and Norway.

At that time these non-native Spruce were in the news. Wise old humans had decided it was a really good idea to plant these trees in the flow country of northern Scotland where few trees have ever grown, rare plants thrive and wading birds nest because they love the wide-open spaces. It was drummed into me like a winnowing Snipe over a Sutherland bog that Spruce is bad! There is no doubt that planting non-native forests in these areas was a very bad idea but is Spruce bad everywhere?

Dogma very rarely lasts very long in natural history. And it wasn’t long before I was questioning what I had been told and changing my opinion of the big bad Spruce. In my home county of North Yorkshire, I noticed the Great Yorkshire Forest in the North York Moors was full of young Spruce and at the same time many songbirds. Willow Warblers, Whitethroats, Linnets and Yellowhammers loved the thickets of young Spruce growing alongside Birch, Gorse and Willow. 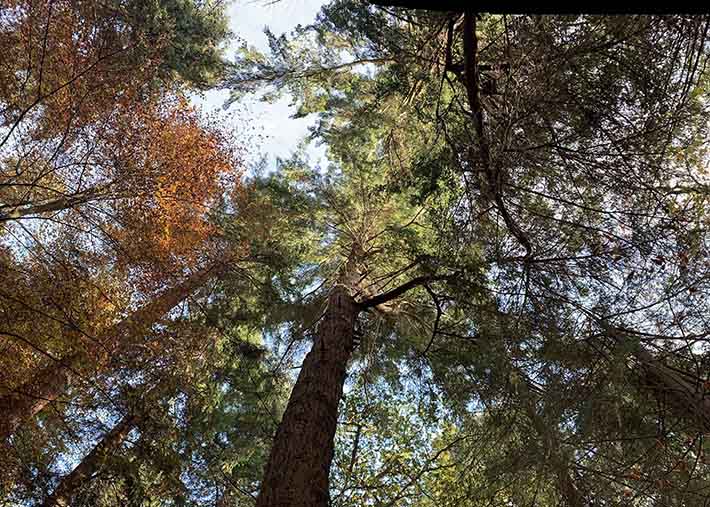 As the planted Spruce became a little older and taller, I noticed new birds moved in such as Common Crossbills, Lesser Redpolls and European Turtle Doves. European Turtle Doves have been nesting in plantation forestry in Yorkshire for over 100 years but that’s another story.

My opinion about Spruce was changing as my own observations revealed a greater truth than I was once taught. What really made me excited though was the thought that adaptation to a relatively new habitat was happening right in front of my eyes. These birds were adapting to change faster than we could see it.

As I have grown older, I have followed the canopy upwards, my eyes reaching into the tall branches and dense needles of tallest Spruce trees I can find. I love watching Goldcrests cascading down the low hung branches, hovering amongst the needles in search of insects. Treecreepers crawl slowly upwards from the base of a gnarly old trunk, examining every nook and cranny created by the wonderfully twisted and fissured bark. These older specimen trees must be full of opportunities for birds and other wildlife.

In 2015, I was excited to find a pair of Spotted Flycatchers, nesting behind a thick basket like structure created by drooping branches and tangled dead wood high up in the canopy of a 100-year-old Spruce. I really enjoyed this discovery. I had never heard of a Spotted Flycatcher nesting in a place like this, they were supposed to nest in ivy on the side of vicarage walls, or so the books once said! This Spotted Flycatcher had found a new niche in a big old tree and I had found yet another inspiring example of adaptation, new life and an opportunity to once again update the old dogma.