Spring is definitely in the air, and there's nothing better than seeing the first lambs gambolling in the dales and the return of three of our iconic wading birds, curlew, golden plover and lapwings to the high moors.

It's the traditional time to see mad March hares 'sparring'. It's actually courting behaviour, as the females fend off the amorous advances of the male. Brown hares can be seen courting any month of the year, but spring is the best time, when hormones are high and green fields and farmland have yet to grow lush and obscure their antics. They can chase at 40mph! You'll have a good chance of seeing them in any of our open areas such as fields, grassland, meadows, moorland and woodland edges across the North York Moors and Howardian Hills.

The aerobatic courting displays of the lapwing are a real treat. Its wide boxy wings give a ‘lapping’ sound as it flies steadily skyward, making its call of ‘p’weet, p’weet’. Eventually it turns to plunge downward and then twists and rolls, seemingly out of control. Head north out of Osmotherley on the Cleveland Way and up onto Scarth Wood Moor for good sightings. It’s a great place to see curlew and golden plover too.

This month why not try a spot of beachcombing at Runswick Bay, the country's top beachcombing beach? Big tides and winter storms at sea can bring lots of beautiful shells to the surface, which are left lying on the shore, along with countless other curious flotsam and jetsam. Driftwood, giant seaweed, odd sponges, ammonite fossils, shiny pieces of jet, and even shark egg cases might turn up.

Plan any visit around the tide. You can buy a copy of the tide timetable at the Gateway Centre in Staithes and various shops up and down the coast. Alternatively, find it in the Bayfair newspaper or check the tide times online. Set out at least an hour before low tide to give yourself enough time to walk out and explore before heading back.

Whatever the weather is like, March brings with it lengthening days. Yorkshire Coast Nature's Richard Baines explores what to look out for during the coming month.

Personal reflections on two of our most iconic species in the North York Moors National Park.

The magic and mystery of certain birds stays with you throughout life. Northern Goshawk and European Turtle Dove are two species which are close to my heart.

As a very keen teenage birder, I dreamt of seeing a Goshawk. With gripped attention I would devour stories describing their amazing power and pour over field guides showing their mean red-eyed stare, imagining the excitement of my first encounter.

They were a rare bird on the northern edge of the North York Moors National Park where I grew up in the 1980s. If I had claimed to have seen one, I would have never have been believed. But their rarity only increased my desire to see one. I learnt about their secretive nature and how they spend much of their lives hunting deep in large forests. Even if we had been lucky enough to have a breeding pair nearby, we may not have known they were there… I learnt about the ignorant persecution they suffered in the 19th century… and then their recent rise again from the ashes of extinction. 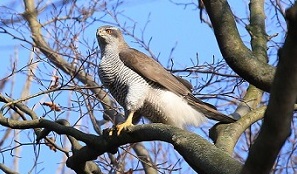 In 1991 I saw my first North Yorkshire Goshawk perched on a fence post on the edge of a forest. It quickly vanished but that memory has never left me. The size and bulk of that massive female made me immediately wonder how I could ever mistake one from a Sparrowhawk.

The sharpness of eye and the speed at which it dropped from its perch and zig-zagged through the closely packed trees was exactly what I needed to see to keep that magic alive!

I have now been watching Goshawks in our beautiful North Yorkshire Forests for 30 years. During this time, I have watched them displaying in spring and had fabulously prolonged views of recently fledged juveniles fighting above the forest. However, I have never seen one so close as that first encounter. I have since hankered for more close views but I was fearful this would take something away from my original memory of that secretive ghost of the forest.

In 2018 I travelled to Berlin to watch their famous city Goshawks. With no significant persecution in Germany, they are fearless. But maybe I would lose that magic…I need not have been so apprehensive. The amazing close views and insight into their life made me love these birds even more!

At the opposite end of the meanness scale are European Turtle Doves. They are gorgeously coloured gentle birds with the most soporific song and delightful display. What they lack in muscle power they make up for in migration stamina. A round trip of 11,000km completed every year to Africa and back!

They weren’t as rare as Goshawks in my youth but we were aware of their declining numbers but I didn’t realise they had a stronghold in the North Yorkshire Forests. They started pushing north and nesting in North Yorkshire at the turn of the 20th century during a time of new forestry planting. Like many other so called ‘farmland’ birds they are essentially a forest species which has adapted to farmland. 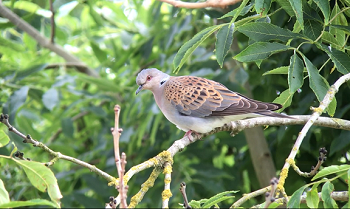 As Volunteer North Yorkshire Turtle Dove Project Officer, I organise surveys every spring and I can’t wait to hear our first returning dove this year. Just after dawn the males sing from an exposed perch, their purr drifting across the forest. In 2020 I was even lucky enough to hear a Turtle Dove singing at the same time as a European Nightjar, I was star struck!

The first Turtle Doves usually return in mid-April but in 2019 we had our first sighting on 19 March, so it’s not long now before we will be welcoming our Yorkshire doves back.

Our Goshawks and Turtle Doves share the same habitat, the beautiful North Yorkshire Forests. They belong here and occupy an important place in our natural heritage. We should be proud we still have an opportunity to enjoy their presence. They do however share the same problem; illegal persecution which threatens their very existence.

Turtle Doves are shot in their millions on their way to Yorkshire from Africa and Goshawks are persecuted in North Yorkshire. We pour hundreds of thousands of pounds into projects and protection for Turtle Doves but a hunter can sign up for a European holiday shooting Turtle Doves for so called sport without any legal hurdle. Utter madness! So why do we bother? Because these and many other birds are close to our hearts, because we really care, and because there are many generations of conservationists we must not let down.

So, if you are lucky enough to encounter a mysterious Goshawk or a beautiful Turtle Dove this spring, bask in their glory, drink in the experience but make sure you contribute in some way to their survival. Without your help we could easily lose part of our natural heritage forever.

To help Goshawks, join one of Yorkshire Coast Nature’s Goshawk Safaris this spring - 20% of income from every trip goes to RSPB species investigation.

Read all about our North Yorkshire Turtle Dove Project.